If you are missing your Caller ID on inbound calls follow the steps below to diagnose and resolve:

*Note: Sangoma cards do not have any affect on caller ID.  Sangoma cards simply pass the information along, as received.  The steps below help you diagnose what software/hardware (around the Sangoma card/driver) is causing the issue.

Take a line trace to check for caller ID

The first step to identify missing caller ID is take a line trace for an inbound call (which will contain the caller id).

If you do not see your Caller ID in the captured trace, this means you need to contact your telco to have them resolve your issue since they are not allowing caller ID to be sent to you.
If you DO see caller ID in the trace, then proceed to see why your caller ID is not being transferred to Asterisk or your SIP side.

To take a line trace, simply use the utility called wanpipemon that comes with the Sangoma driver for your card:

Now that you have captures a pcap trace from the steps above, it is time to analyze them in wireshark.

-> If your pcap trace does not open up properly in wireshark, verify that the trace is not 0 bytes.  If the trace is empty, that means you have taken the trace on the wrong interface  (i.e. w1g1 instead of w2g1)

Below is an example of a wireshark trace for an inbound call:

Notice how the screen is divided into two panes.  The top portion will show you Q931 messages (i.e. SETUP, CONNECT, DISCONNECT).
When clicking on each one, the bottom pane describes the details of each message.

Below is a sample of a trace that displays the Caller ID present on the line. If your trace does not show a phone number is the same area as the trace below, contact your telco to resolve your missing caller ID issue. 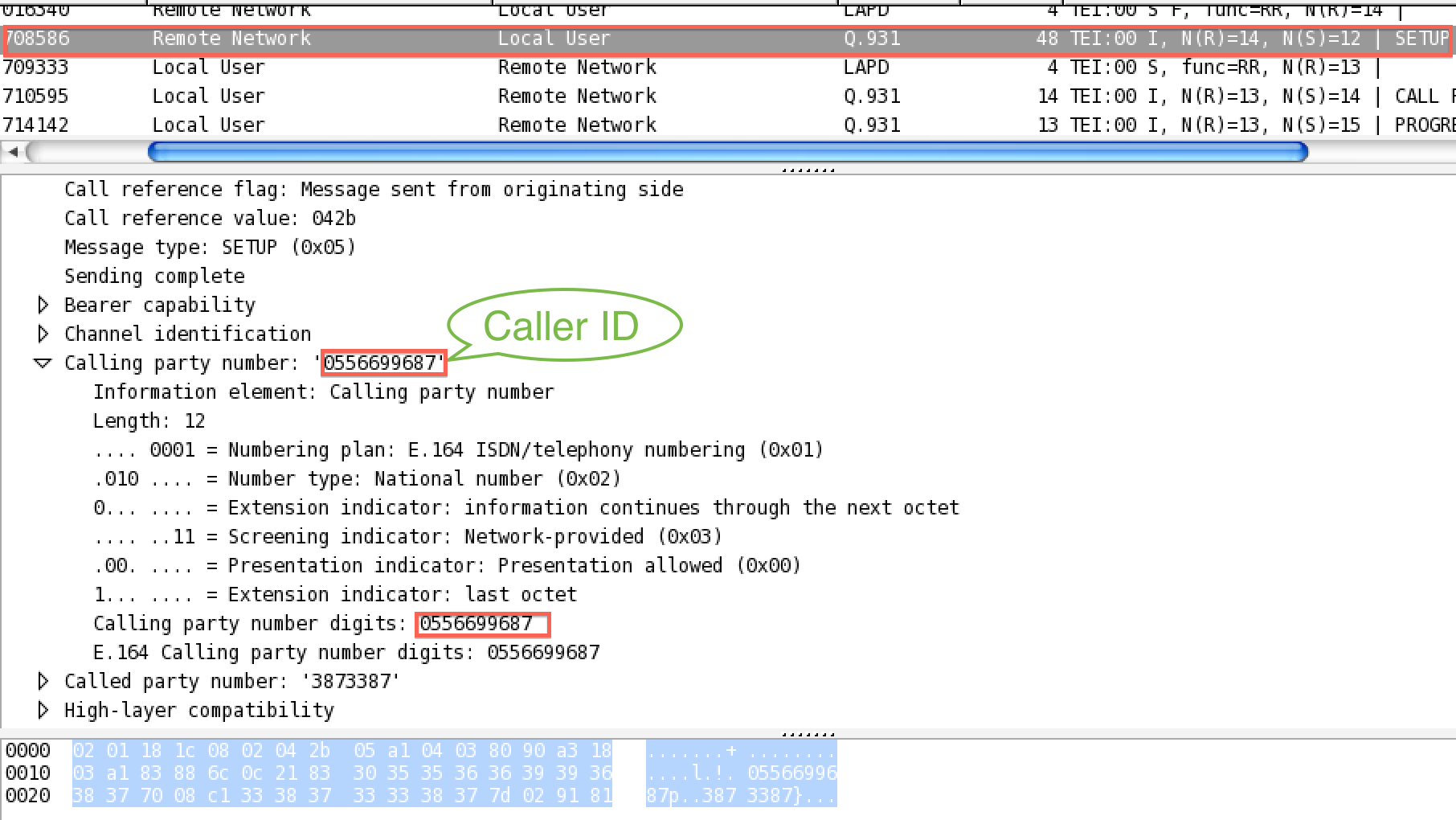 If caller ID was present in the line trace above, the next step is to verify that the configuration in the DAHDI signalling layer is correct.

Using an editor of your choice, open up the file:
-> /etc/asterisk/chan_dahdi.conf

Verify that you have callerID enabled by verifying you see the following:

If the above is set to 'no' simply edit the line, save, then restart asterisk. This should resolve the caller ID issue.

* If your issue is that you are missing the leading 0, you should add the prefix in your asterisk dial plan.

Edit your asterisk dial plan, and add the following line, directly below the answer  line.
For example:

->Run the following command in your Linux command line to take a wireshark trace:

The above line will take a sip wireshark trace on eth0 and save a file called 'testcall.pcap' in the local directory
(If your calls use another interface other than eth0, replace eth0 with that interface)

For all caller ID issues, you should consult the asterisk forums on the internet to help resolve your issue.
Caller ID issue are typically caused by DAHDI signalling layer misconfiguration. Sangoma support may not be able to help you beyond providing feedback on taking a wireshark trace using the wanpipemon utility.