Part of the VQ Plus Commercial Module

Queue Callback is part of the VQ Plus module. When enabled on a queue, the callback feature frees a caller's time by letting him or her "press 1" to exit the call queue and receive an automated callback. The callback can go to the number they called in with, or one of their choice, and you have control over what are considered acceptable numbers.

If for some reason the caller does not answer or accept the callback, or if an answering machine/voicemail answers, the system can try again if configured to do so. You can set a maximum retry count as well as a time delay between retries. If the callback fails permanently, the caller forfeits his/her position in line.

You can view callback reports to see which callbacks are in progress, and which have succeeded or failed.

How to Create a Queue Callback

Navigate to Queue Callback in the PBX GUI: 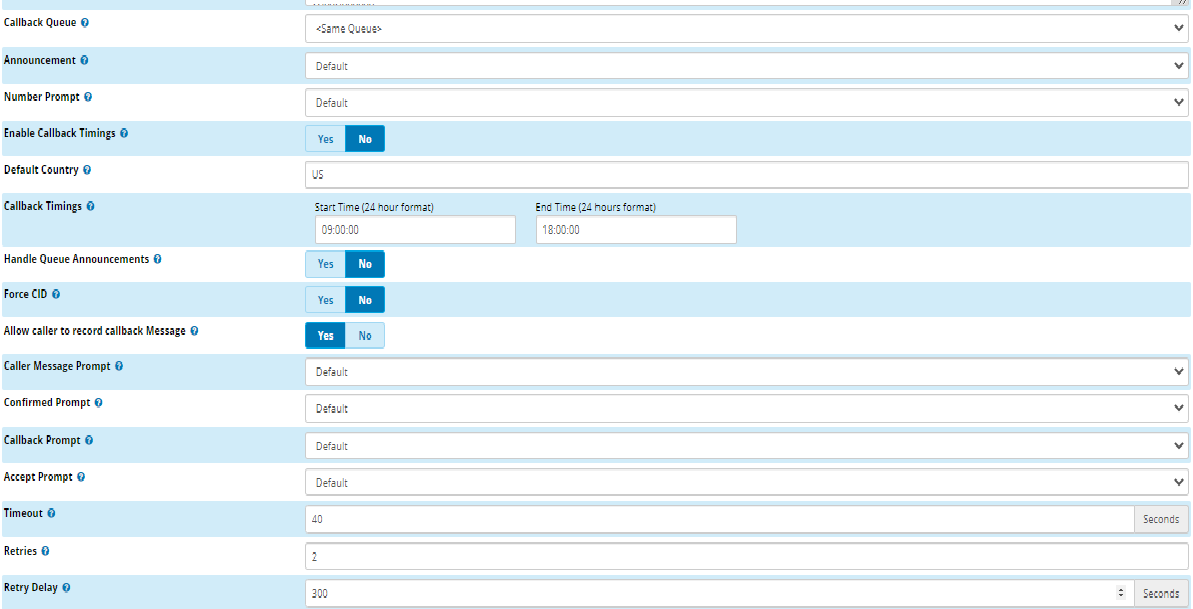 A descriptive name for this Queue Callback.

Caller ID to be used when calling back a caller.

Optional - Here, you can define any prepend to be added to the caller's callback number. This is useful, for example, if you want to make the system use a specific route that only looks for a certain prepended number in the dial pattern, such as "9."

Here is where you define what numbers a caller can enter when requesting a call back. In the U.S., we highly suggest setting this to things like 10- or 11-digit numbers, and not allowing callers to enter expensive numbers like international numbers, or things like 911. The caller will need to enter a valid number that matches one of the dial patterns you set here.

The field may be pre-populated with the following two dial patterns:

The callbacks process through your outbound routes. These callbacks are handled in the same manner as if you picked up your phone and dialed the number.

The queue to place the caller into when they are called back. The default is to route the caller into the same queue they came from. You can also select a different queue or virtual queue from the drop-down menu.

The recording to play to callers periodically while they are waiting in the queue (before they select the callback option). This announcement is only played if your queue uses the queue callback option directly, without using an IVR as an intermediary.

For the announcement prompt and most of the others configured here, you can change the default setting by selecting a system recording created in the System Recordings module. This should be a single prompt file, as queues cannot play aggregate recordings.

Prompt to play to caller when requesting callback number.

*Note this is to either accept the call back via 1 or deny via 2. If using a custom announcement be sure to inform the user to accept or decline the call back number.

Yes/No: This will Force the callback to use same callerid. (Note: Enabling this will NOT ask for an alternative number to callback.)

If you enable this option then callback daemon will be handling the following announcements caller position, holdtime and periodic announcements.(Note: Announcements timings may vary from 0 to 10 seconds). If the option is disabled then all announcements will be from Queue. Note : Queue will be announcing the position based on the active calls in the queue (Not included of callback opted calls)

Yes/No: This message will be played back to the caller when they are called back.

If Allow caller to record callback message is enabled above, this prompt will be played.

This is the final prompt played to callers informing them that the system will call them back. Default = "You will be called back once your position in line has been reached."

This prompt is played to callers when they answer the callback at the destination number. Default = "This is a callback for (name/number)."

How many seconds to wait for answer/confirmation when calling the destination number. If the caller does not press 1 to be connected to the queue after this amount of time, the callback will timeout. Default = "I’m sorry, the incoming call is no longer available, or has been answered by someone else.”

How many times to retry calling the destination number before giving up, if the system cannot reach the caller and/or the caller does not press 1 to accept the callback. If you would like to disable retries, set this to 0.

How many seconds to wait between retry attempts, if Retries are enabled above. This should usually be at least as long as timeout. We suggest something like 300 seconds (5 minutes).

How to Link a Queue to a Queue Callback

After you have configured your Queue Callback as described above, you can link a queue to the callback by configuring a "Break Out" option in the queue.

This wiki assumes you are familiar with setting up Queues. For full instructions on configuring queues, please see the Queues Module User Guide.

Navigate to the Queues module:

Create a queue or edit an existing queue.

Configure the Periodic Announcements section to use a queue callback by configuring the options described below.

For a basic setup, if you would like callers to go directly to a queue callback when they press 1, set Break Out Type to Queue Callback.

For a more advanced setup, if you would like to give callers more options in addition to a queue callback, you can set Break Out Type to IVR Break Out Menu. If callers press 1, they will be taken to the IVR you have set up, and they will be able to select more options from there. For the sake of this wiki, we'll assume that your IVR has a queue callback as one of its destinations. You can use the IVR module to set up an IVR. For example, you might set up an IVR that lets callers choose whether to leave a voicemail or use the queue callback feature.

Only available when Break Out Type = IVR Break Out Menu. Select which IVR to use. Callers will be routed to this IVR when they press 1 in the queue.

Only available when Break Out Type = Queue Callback. Select which queue callback to use. Callers will be routed to this callback when they press 1 in the queue.

How often to announce a voice menu to the caller. Select a time interval from the drop-down menu. We recommend you use an interval longer than one minute. If you select "0," the announcement will not be played, and the queue break out would be a "hidden" option.

When finished making all edits to your queue, click the Submit button. Then click the Apply Config button.

A Note on Hold Times